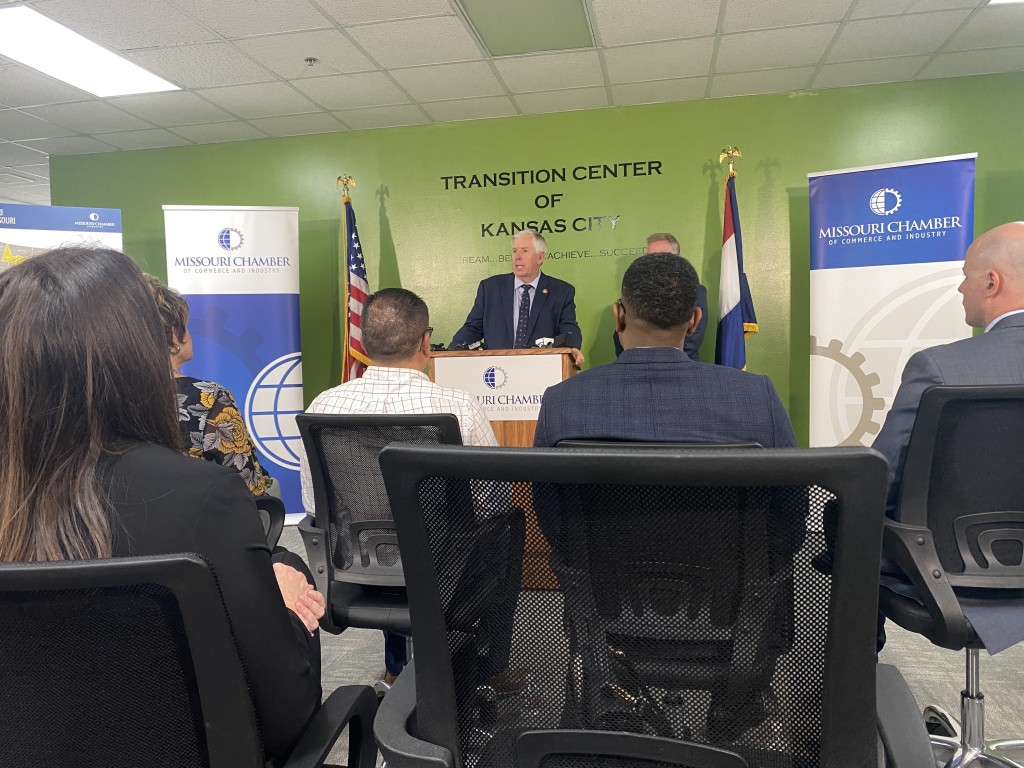 Parson and Leutkemeyer utilized their speaking time at the dais to remind us that the worst criminals in America are violent offenders. But an inevitable confusion lingered in the room as the following speakers took the stand to up the ante. The appearance of the Missouri politicians served as an introduction to the processes and inspirations behind the transition center’s efforts to reduce recidivism.

“You’re going to have to take violent criminals off the streets and make them pay the price for what they’re doing to our society,” Parson says.

The center is part of a statewide initiative called Safer Missouri, Stronger Missouri. TCKC focuses on offering educational and employable opportunities for its residents, with an emphasis on maintaining dignity and cooperation.

“Crime is hurting Missouri’s economy. It’s impacting businesses large and small in communities of all sizes. It’s hurting our ability to attract business investment. In some cases, crime is driving jobs out of the state,” said Daniel P. Mehan, president and CEO of the Missouri Chamber of Commerce and Industry, on a page where you can download the full initiative proposal. “Businesses are united. This is a crisis that must be addressed now. We know that many problems need to be handled locally, but statewide policy must be deployed as well.”

The backdrop of the facility lacked recognition for itself. Until two Turner Construction employees stepped up, the conversation had only graced previous campaign promises and frowned upon badge politics.

Dej’on Slaughter, a business and community advocate at Turner Construction, sought to note the importance of not turning away ex-convicts from the workforce. Speaking for the company, Slaughter also mentioned their belief in second chances and re-entry engagement.

Also from Turner Construction, carpenter Jonathan Vasquez, vocalized the opportunities his second chance actualized. After being released from prison, Vasquez was hired by the company in February of 2021. While describing the re-entry procedure through court approval and standards Vasquez says, “It was rough, getting through the process, but now my overall achievement was a blessing.”

The governor’s plan includes supporting law enforcement with more resources, training, and finances; harsher penalties for those committing violent crimes in the state; but giving felons with nonviolent crimes a second chance at succeeding after being released.

The Transition Center is itself a revamped corrections facility. It is difficult to understand how helpful it would be for former inmates to re-enter a former prison that still looks like a prison, down to the metal detectors and lock-and-key access systems. The building projects the same level of muddled, misguided ideology for helping the formerly incarcerated as Parson’s latest pitch for increasing police support.

Are You Easy To Do Business With?