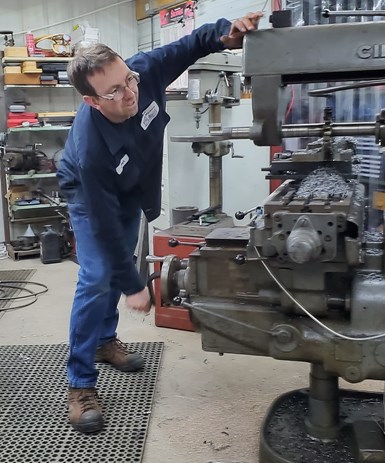 Although Josh Topper has always had a personal preference for manual machining, he says he would not necessarily be averse to CNC if the business demanded it. So far, it has not. Now, he is focused on not just machining, but also spreading the word about his growing business (and the merits of manual machining) on YouTube.

Josh Topper has no time for CNC programming. In fact, he says his namesake business, Topper Machine LLC, succeeds precisely because it relies exclusively on manual machine tools.

Topper does not attempt to compete with CNC’s unassailable advantage: the capability to repeatedly execute pre-programmed cutting routines. Rather, he seeks out low-volume work, where he can find ways to turn time spent with a computer into a disadvantage instead. Prototypes, one-offs, repairs and other low-volume jobs present opportunities to skip the programming phase and win the race to final part, he says, even against CNC machines that cut faster.

Other potentially profitable work includes parts that are too large, require specialty operations or are otherwise impractical for local CNC machining businesses, which seem increasingly likely to be customers rather than competitors. “In the last few months, I’ve picked up two more CNC shops that wanted to hand off stuff because it’s not profitable, or because they’re understaffed,” Topper says, citing one recent case that involved drilling and countersinking a dozen steel plates. “By the time they program the machine and get set up, it might be an hour or two before they start running parts,” he says. “I had them done in an hour,” he says.

Repair and replacement parts present still more opportunities to profit from manual machining, particularly lately. During the busiest periods, the one-man shop could easily accommodate a full-time welder and a second full-time machinist, and “we’d never step on each other’s toes,” he says. And although the work can be intermittent, the shop had between 20 and 30 steady customers at the time of this writing, about half of which “I do something for every week or two,” he says. “There’s a lot of work out there — a lot that can be done manually. I’m still discovering new customers.”

Modern Machine Shop’s primary focus is CNC machining. However, Topper’s story proves that traditionally operated equipment can still be competitive. For those with the requisite passion and skill, manual machining can be a viable business.

The Shop in the Woods

Topper works where he lives on a remote lot in northern Wisconsin that seems too serene for a manufacturing company. Given the location, hearing that 65% of the shop’s work comes from the local lumber industry came as no surprise. However, this figure represents a shift from the shop’s early years, when nearly two-thirds of the work was supplying parts to construction equipment OEMs. Railroads and agricultural equipment also have been reliable sources of work. “I feel being in a more populated area would help, but I don’t want to live there,” he says. “I like my home and shop in the woods. In the world we live in, it really isn’t hard to truck parts.”

Aside from the shop itself, the first thing a visitor might notice are the various manifestations of its founder’s hobbies and passions. Perhaps the most obvious example is a massive circular sawmill in one corner of the lot, a machine that Topper built both to sell lumber and to showcase his machining capabilities. The hi-rail truck (for “highway/railway”) in the driveway is equipped to inspect railroad track, a job that he often performs on the way to deliver machined parts. Restored steam engines evidence another side gig, as well as his interest in history (particularly preserving history).

“Marriage, taking on stepkids, building a house — nothing at all compared to taking on starting a manual-only machine shop.” Josh Topper, Topper Machine LLC

Suffice it to say, Topper keeps himself busy. As he opens the shop’s attached garage, it becomes apparent that he earns a good living, too. Sitting on a trailer still awaiting installation is his newest machine tool: a 2021-model European Lion 23MT engine lathe, which he’d picked up in the early morning hours of the same, frigid day the surrounding photographs were taken. 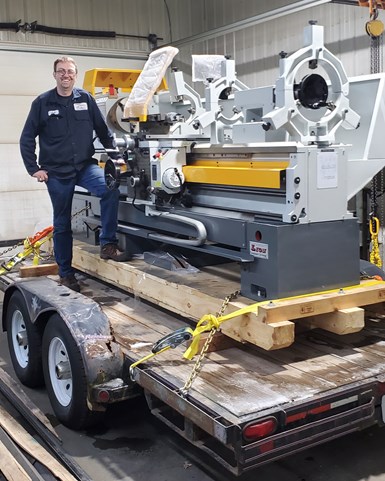 One of the features Topper says he appreciates most about his new lathe is the clutched spindle. On lathes without a clutch, he says the motor starts and stops, snapping to full speed and/or potentially unchucking in applications with materials that require lighter clamping forces.

Although his various talents bring in extra money, Topper says equipment investments are funded entirely by profits from machining. Likewise for the shop’s 2014 expansion to 3,000 square feet (largely to accommodate a separate welding area); and, two years later, the construction of his house on the same lot (and the subsequent conversion of the shop’s upper floor from living space to office space). The hobby and passion first became a business after Topper was laid off from his position as a diesel locomotive mechanic in 2012. Armed with a lathe and a mill, he “made it official” in May of that year. “I went full-time with no customers, no work, nothing,” he recalls. “I just started knocking on doors.”

Fast, and Right the First Time

As a one-man machining business, Topper must play many roles: manager, machinist, accountant, logistics officer and head of sales and marketing, including regular postings to a Youtube channel to market his capabilities. 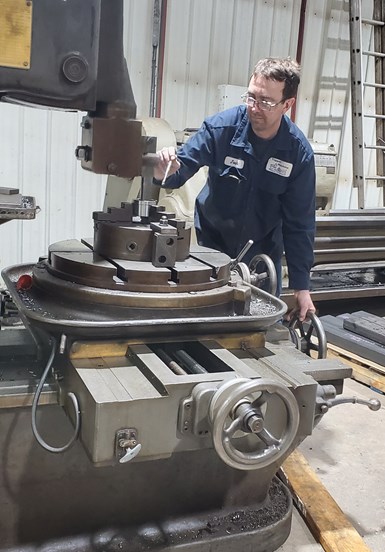 Topper cites specialty equipment as key to competitiveness. The most recent example is this vertical slotting machine, which he installed just last year.

Based on these videos, Topper has nothing to hide (at least, as long as his customers don’t). All the techniques and tricks that help him make quality parts fast are on full display, ranging from how to construct a home-built crane to re-machining fixtures for new setups — a significant advantage for the manual machinist. “I don’t need to program the machine to do that, I just do it,” he says.

As for telling the world about how he does it, Topper can be fearless on YouTube in part because few people possess the same level of knowledge and skill. Among those who do, not all have the same level of drive and ambition. However, there are also other lessons that can be drawn from Topper’s experience. Among other characteristics, Topper Machine LLC can attribute its continued growth to:

Topper built this toolholder for parts too large in diameter to clear the cross-slide of his largest monarch lathe (which will have been replaced by the time this article is published).

A slotting cutter takes a 5/8-inch-deep, 1-inch-wide pass at 33 rpm and 1.25 ipm through a 6-foot bar that will later be segmented into individual parts. Three passes complete the part, each taking about 30 minutes. During that time, Topper can attend to other tasks in the shop, listening for when the machine “pops the feed out” at the end of each pass.

The manual HMC is ideal for deep, heavy cuts.

Topper had no illusions about the challenges he’d face when he started the business. “Marriage, taking on stepkids, building a house — nothing at all compared to taking on starting a manual-only machine shop,” he says in one Youtube video. And yet, that same video — titled “Starting a Manual Only Machine Shop” — is in many ways a call to action. At 40, Topper says he is the youngest in a local network of manual machinists who provide one another with recommendations, and sometimes even work. He wonders about the implications of lost knowledge as his friends retire, and no one steps in to take their place. “Guys like me can make it (in business), because there aren’t many of us left,” he says.

In this context, “us” has a specific meaning — namely, those who enjoy working with their hands as much or more than anything having to do with a computer. “Us manual (machinists), we’re always putting a hand on the machine to feel it,” he says. “We’re listening to it. To me, that’s a lot of fun.” 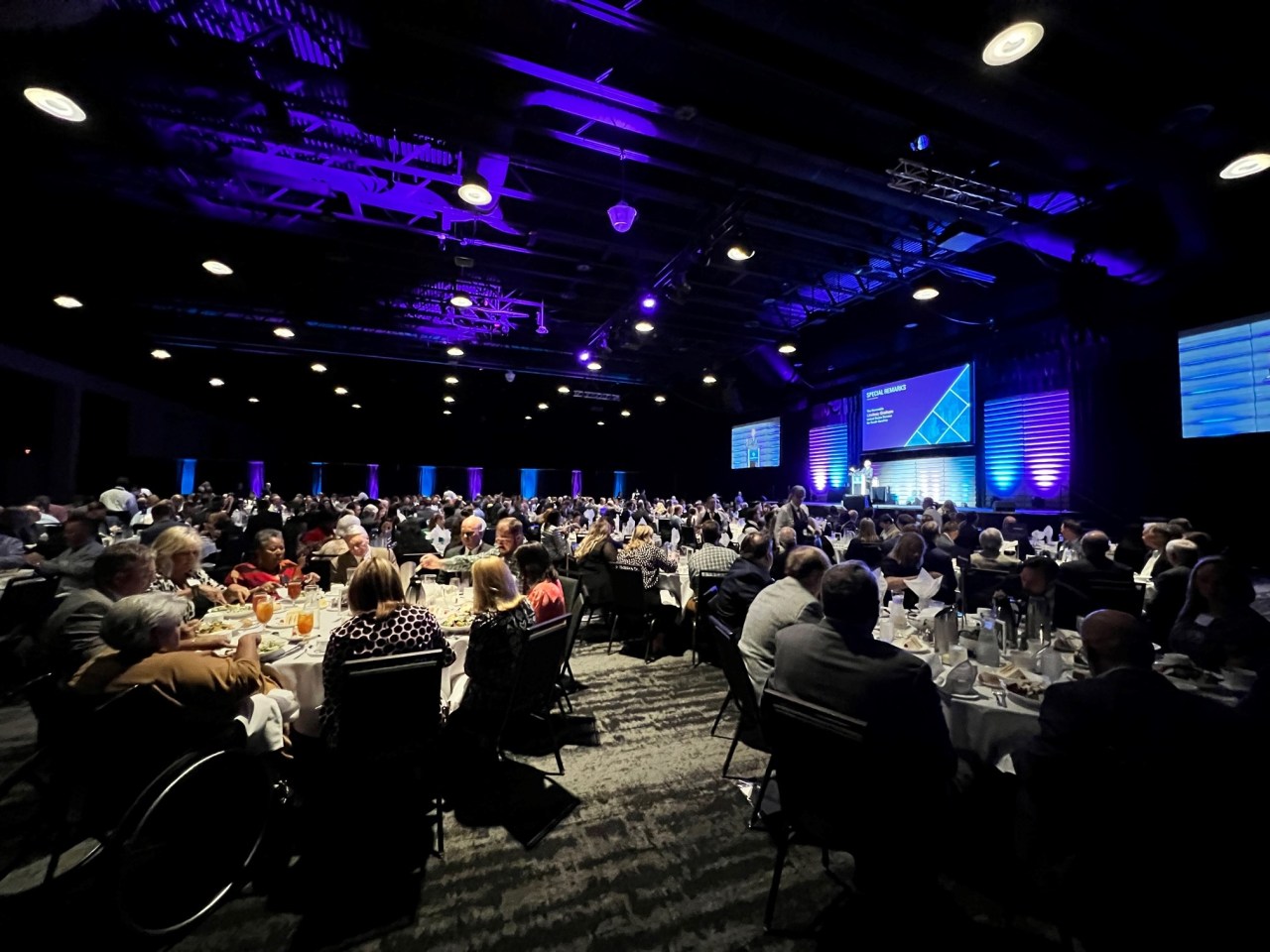